The London Eye sparkles like never before thanks to Kärcher

As part of its cultural sponsorship programme, Kärcher decided to tackle a striking landmark in the British capital city: the London Eye was cleaned from top to bottom at the beginning of 2013 for the first time ever since it was erected in 2000. In order not to affect the operations of Europe’s largest Ferris wheel, the work was carried out at night during the three-week project.

The 135-metre tall Ferris wheel on the bank of the river Thames consists of a steel frame with 32 attached pods. The majority of the dirt consisted of lubricants, which have to be constantly applied to ensure that the axle suspensions operate smoothly, and pollution from emissions. In order to remove the stubborn layer of dirt, during every night shift two to three pods were first of all sprayed with a gentle, alkaline cleaning agent and then cleaned by hand with scouring pads before finally being sprayed with hot-water high-pressure cleaners with 180 bar and a flow rate of up to 1,200 litres of water an hour. The cleaning experts reached the 70-metre high centre of the Ferris wheel using rope access technology. They took the equally long high-pressure hose with them whilst the device remained on the ground. 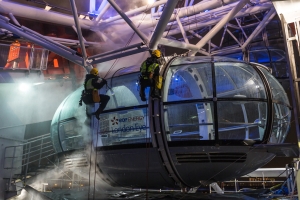 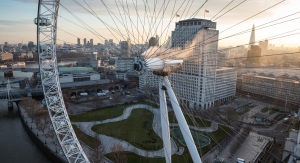